Turisme Llíria reactivates the cultural tourism program to kick off the spring season. “From the department, we have organized three tourist-cultural activities with diverse themes that will allow visitors and our own neighbors to discover unique aspects of Llíria’s history”, explained the mayor of Tourism, Paco García.

The event “Discover the Rutes de la Memòria” will open this spring triathlon with the first guided visit to the war heritage of Llíria carried out by the local guide Manuel Sánchez. The activity, which will be held on Saturday, April 9, includes a bus excursion from the town center of Llíria to the main architectural remains of the Spanish Civil War in the municipality. To participate it is necessary to previously register in the App or municipal website.

“This visit, which complies with the Law of Historical Memory and has the objective of spreading peace from sight to our most recent past, also has in memory the Ukrainian town of Kharkiv, Creative City of Music by UNESCO. like Llíria, which is suffering the devastating effects of the armed conflict”, stated Paco García.

The Valencia Art & Gastronomy Festival 2022, FestIN, will be the second spring event of this triumvirate. “This is the first participation of Llíria in this action of the Tourism area of ​​the Valencia City Council, Visit València, in which culture and gastronomy are combined, and which, together with the capital of Túria and Gandia, has our city as a of their proposals”, the councilor pointed out.

Turisme Llíria has prepared an activity called “A Gastro-Cultural Symphony” to value the Renaissance palace of Ca la Vila with a guided tour of the Renaissance and Baroque Llíria by the Tourism technician Vicent Sesé. It also includes a baroque musical performance performed by a female chamber trio made up of local string players and a gastronomic tasting of products from the Aliments Tradicionals de Llíria brand. The visit will take place on Sunday, April 10 at 11:00 am and it is also necessary to register in advance.

Finally, the Department of Tourism has recovered one of the most deeply rooted tourist activities of Easter in Liria, which had been suspended in recent years due to the pandemic. It is the popular guided tour of the bells of the Iglesia de la Sang that takes place on Holy Saturday. The ascent in small groups to the bell tower of the temple, guided by María García-Pozuelo and Álvaro Petit, will take place on April 16. It will offer a historical interpretation of each of the six bells that make up the set, among which the Foch bell (16th century) stands out. 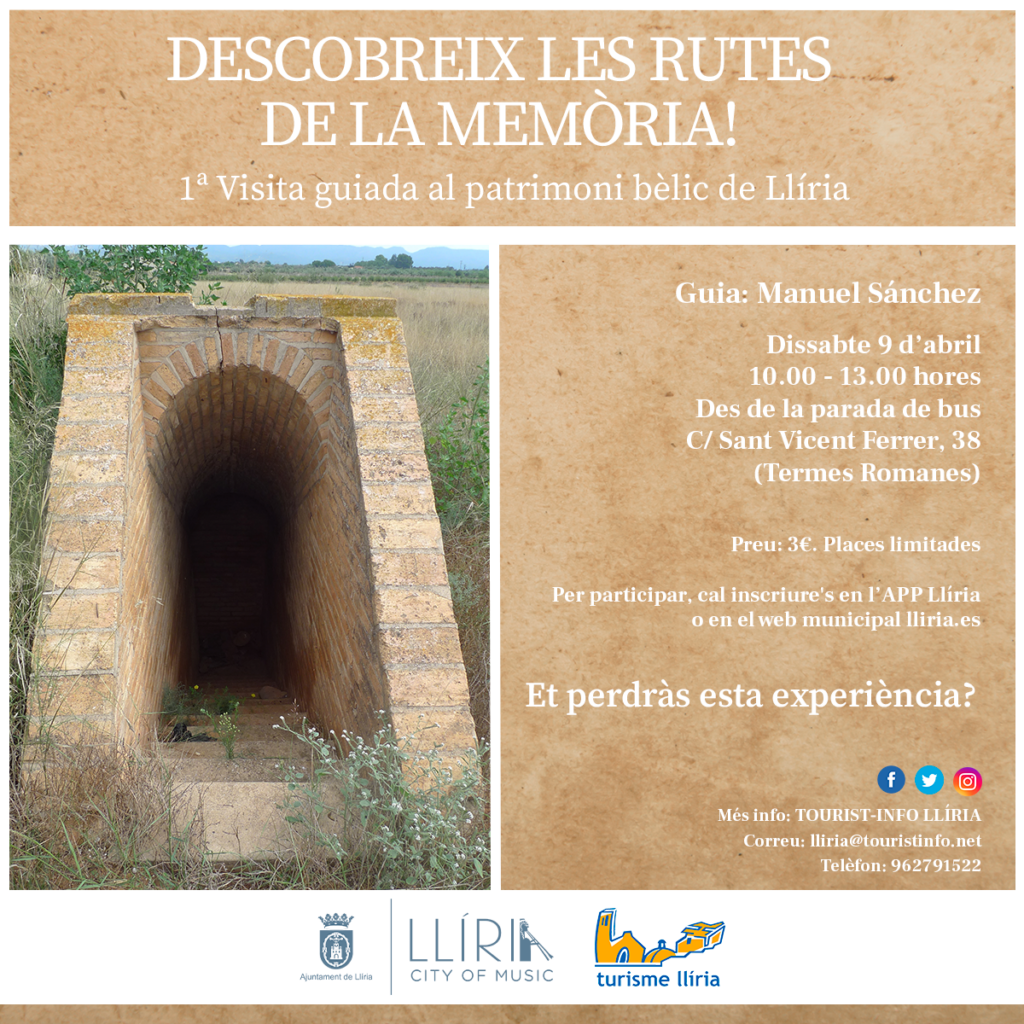 The Department of Tourism promotes a Tourism Sustainability Plan for Llíria